Meet Milo, a very aggressive Pug mix that lives in a building where everyone knows to stay away from him. Milo demonstrates that aggression in dogs is not based solely on a dog’s breed. And, although many would think this is a dog that comes from an abusive background, I didn’t think that was the case. The truth is, we don’t know for sure what his background is

But I believed Milo’s aggression was a case of genetics, and due to no one knowing how to address this level of behavior, it got worse over time as he learned his “fight” instead of “flight” response achieved what he wanted: people stayed away from him.

There Are Several Causes of Dog Aggression

I once heard a fellow dog trainer say something that really resonated with me, as it described my experience with dogs really well. He said, “When you move a stable dog to an unstable environment they become unstable, but come back to stability when you remove them from that environment. Unstable dogs will be unstable no matter the environment.”

Now, when I come across dogs like Milo, I don’t see abuse. I see a dog that is unstable who doesn’t know how to handle stress and hasn’t been taught how.

Dogs that were abused previously tend to be afraid or wary of certain objects. For example, if a broom was used to beat the dog then they will become very stressed or afraid when confronted with a broom – but not so much the person holding the broom.

Aggression is Not Limited to Specific Dog Breeds 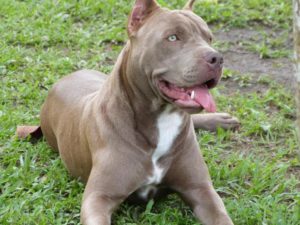 When I tell people that I specialize in aggression they almost always ask if I work with a lot of pit bulls, and the answer is yes, but they are not always my aggression cases. In fact, there is no specific breed I work with more than the other.

I’ve worked with everything from Rottweilers to Chihuahuas to German Shepherds to Malteses to everything in between. On occasion, I may get waves of breeds, but that is just coincidence. Currently, the breeds I’m seeing a lot of are Bernedoodles and Golden Retrievers. I’ve had waves of pitties, Chihuahuas, German Shepherds, and Labrador Retrievers.

The key thing to remember is that any breed or mixed-breed dog can be aggressive. I also take the word “aggressive” with a grain of salt when someone contacts me to rehab their dog’s aggression; more often than not the dog is not aggressive, but reactive.

Knowing the Difference Between Aggressive and Reactive Behavior

Reactivity in dogs can look similar to aggression; the difference is once the dog is confronted by the stimulus and is given the opportunity to be aggressive, they’re not. This is why I wear a bite suit or bring a bite sleeve to aggression training sessions because it allows me to confront the dog to see what they’re all about. Bite or bluff?

In the video, you’ll see Milo is clearly reactive, and when confronted he bites so there is definite intent there. Once I know a dog’s aggressive, I want to know what the severity is and what the root of the aggression is.

The root of Milo’s aggression is fear; he may look confident, but that’s because people have reacted to him the way he wanted them to. No one has ever challenged him, made contact with him, and not backed down, so his ego has grown. Once that behavior begins to settle in his brain, panic sets in and you see more aggression because he needs to go even further than before in order to get the result he wants.

When I first walk in the room you can see him move toward me, but then he quickly backs off as he realizes I’m going in.

At this point, fear sets in and he needs to make a point so he charges forward and bites as I make contact. His tail is wagging quickly as panic is setting in and he becomes overly stressed.

He bites light and frantically – the worst bite being a 3 on a scale of 1 to 10. He then stops and tries to pose and act tough as he sees I’m not backing away. Eventually, he begins to understand his aggression isn’t working and he begins to avoid me. You can also hear the lack of confidence in his bark; it’s more of a WOOO WOOO WOOO sound.

A confident dog, however, is relentless, will not back down, and will continue to move forward.

But that’s not what we see with Milo; his brain perceives a threat and he is utilizing aggression as a means to keep the stimulus away so there is no opportunity for him to be hurt. It’s a, “I’ll hurt you before you hurt me,” response.

In order for me to rewire his response system, I need to teach him that people do not mean him any harm and the only way to do that is to do what he fears most: create physical contact.

Punishment is Not a Solution to a Dog’s Aggression

This is where other trainers fall short; they punish the aggression, which is a symptom of an underlying problem. But that creates a superficial result. Sure, the dog isn’t lunging and biting at people, but the fear is still there because the dog has only learned they cannot be reactive. However, the fear is still very much present in their head.

With Milo, I am directly addressing his fear by making contact and allowing him to respond however he wants, but I have the remote collar to address the aggression so he can see I do not mean any harm.

Is that all there is to it? No, not by a long shot, but I need to start getting him used to experiencing confrontational pressure so that walking past people will be a breeze. Physical contact is the epitome of what he’s afraid of so if he can handle that, he can handle people moving around him.

The second exercise I did with him was going over the Heel exercise, which provides a regular routine of discipline that helps him understand what the remote collar is communicating to him. The Heel, which is used to get your dog to walk beside you without pulling on their leash, is one of several basic dog commands we recommend all owners use.

The Heel command is especially useful because the presence of consequence helps his brain stay passive on a regular basis, which – when practiced over time – will help him become a thinking animal and not a reactive animal.

The structured Heel also works in conjunction with the pressure exercises; what you’re doing is communicating to Milo that his previous means of handling stress are unacceptable and he needs to learn a healthier approach. This will be used to also help guide him through what he can and can’t do when he feels stressed.

As lessons progressed, things that would normally trigger Milo weren’t triggering him anymore.

For example, during the initial consultation, Milo would charge forward every time I stepped away from him, taking up the space I surrendered. And when I stepped in, he would move away because his brain was still stuck in “fight” mode.

But in a later training session, Milo began to not have any response when I stepped in because his brain wasn’t in reactive mode and he had learned the aggression isn’t needed.