Dogs and Children: How to Keep Your Child Safe

Home/Aggression, Behavior, Dogs, FAQ, Q&A/Dogs and Children: How to Keep Your Child Safe

Dogs and Children: How to Keep Your Child Safe 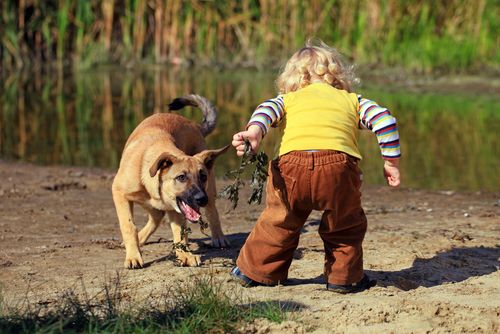 More than 80 percent of all dog bites treated in the emergency room involve children under the age of 15.

This sounds harsh, but it is very true.

You see, I’ve heard and read all sorts of bite stories from many different sources, both people and families. Some were being cautious, others allowed their child to take too many liberties with a dog they were familiar with, and then there are those who were taken off guard by a stray dog.

In every scenario, both the child and the dog lost.

And in many cases, the dog gets put down and the child is traumatized and may carry scars for life.

I hear this a lot: “Oh, my dog would never bite me. They’d bite other people, but me? I can do anything and they’d never bite me! I just know it!”

That’s not how it works for me; if your dog has a mouth, it can bite you. That applies to puppies as well. Whether or not it chooses to is completely up to the dog and there is no way of knowing 100 percent whether or not today is the day your dog will get fed up with having its ears or jowls pulled or being sat on.

Years ago, when I began training, my very first client, Kip, was telling me a story about a relative’s friend who had an older German Shepherd. I can’t remember the exact age of the dog, but I remember it being more than 5 years old.

This woman was so confident about what she could get away with the dog and, ironically, while she was telling her friend, she was bitten in the face. That’s bad.

The dog was asleep on the couch, and she walked over to it as she was talking about how she’d had the dog since it was a puppy and could do anything with it. As the dog was sleeping, she bent over it, grabbed their face, and pushed her face directly into it. Of course, this is when the dog bit her.

Was the dog aggressive? Not in my opinion. Clearly, the dog hadn’t ever had a moment like that before or else she wouldn’t have been bragging the way she was.

I believe the dog wasn’t expecting to wake up to a face in its face and it just reacted in self-defense. Or, maybe the dog was fed up with this woman taking too many liberties over the years, and it just decided to correct her and establish a boundary.

I believe this woman was both naïve and ignorant in her behavior.

I see parents who have this same process with their children.

How to Stop Your Dog from Biting

You can always tell an oncoming child, “No.”

If they walk up to you and your dog with their hands extended, you can step in-between them and give them another firm, “No, you cannot touch my dog.” Who cares if the kid gets upset or the parents give you a dirty look. We have to look at the bigger picture here, which is that the child is learning to approach any dog without asking, and that’s a big problem.

What happens when the kid’s parents aren’t paying attention and their child sees a dog, walks up to it uninvited, and pets it? Maybe the dog isn’t friendly and decides to bite? Or, maybe the dog is friendly, but the child doesn’t have any boundaries and decides to pull the dog’s ears and pulls too hard, and the dog gives a correctional bite. Who pays in the end?

The dog and the child.

If I allow a child to pet my dog, what can I do to keep them safe?

As a dog owner, what I like to do is have the child wait. I’ll crouch down to my dog’s level with my dog in a sitting position. Then, I hold the leash up close by the collar — if not the collar itself — loosely with my left arm around my dog’s neck.

The reason for this positioning is that I can quickly contain my dog by restricting movement of the head with both my left arm and my right hand on the collar. Do not hold onto the dog tight, as it can cause discomfort; you are merely resting your hand around their neck and only adding pressure if they react.

Then, I’ll have the child approach from the side and start by petting them down the back. This approach is non-threatening to the dog and it’s the easiest to address should things go south. From there, the child can slowly work their way up to the dog’s head and under the neck. Once they’re done, I’ll have the child step away and then I’ll get up.

Teaching Children How to Interact With Dogs

Typically, I don’t let children pet dogs until they understand the words “no” and “gentle.” But if you decide it is OK, that is your choice.

Be proactive in teaching your child how to properly interact with dogs. Teach them to be respectful of animals and not pull their ears, jowls, or tail. Also teach them not to pet a dog while they’re sleeping and not to sit on dogs or try use them as a pillow.

This goes for all dogs, big and small, young and old.

Remember — and this is very important — these rules also apply to your own dog. How you allow your child to interact and treat the family dog is how they will treat other people’s dogs! Since they’ll transfer their interactions with the family dog to other dogs, I recommend having your children to ask for permission to even pet the family dog.

It may sound silly, but it will keep them safe in the future.

How to Protect Children From Dog Bites

This steps out the realm of dog training, but it is important.

Know where your child is at all times and who and what they are interacting with.

Tell your child “no” from time to time so they learn to be mindful when other people tell them no, just in case they do manage to sneak away and have to be addressed by another adult.

Also, never leave your child unattended with a dog! You don’t know how many countless times I’ve heard of people coming into a room with a child crying or screaming because it was just bitten by the dog, but no one knows what happened.

What to Do if Your Child is Attacked by a Dog

Should your child be attacked — whether the dog is provoked or not — don’t panic and don’t try to pull your child away from the dog! You risk prey drive kicking in and the dog intensifying its attack. You also risk tearing your child’s muscle as you pull them from the dog’s teeth.

Use the Dog’s Collar to Your Advantage

If the dog has a collar, grab it from the top and pull straight up until the dogs front legs are off the ground so they can’t use the ground to power the attack. Keep them hung by the collar until they choke out and release the bite.

This move is risky, but if the dog is latched on, you can pull straight up on the collar, and as they’re off the ground, take your other hand from underneath, grab the dog’s jowls and fold them over the dog’s back teeth. Then, press down hard so the dog is biting its own jowls. This can help aid in them releasing, but it also puts you at risk of being bitten when it releases.

Should the dog not have a collar, take a belt or even a shirt and wrap it around the dog’s neck and follow the procedure mentioned above.

And keep in mind that the goal is to not pull the dog away; you want to contain the dog and calm the child because if they are squirming or being frantic, it will draw out prey drive and things will get worse.

These techniques are similar to what we would suggest you do when an aggressive off-leash dog approaches, but there are some differences.

I’ve always made it a point when working with children to teach them how to approach dogs correctly because it will help keep them safe in the future. Unfortunately, things like this typically fall under the category of “you never understand until it happens to you.” And once it happens, it’s too late; the damage is done and both parties will face consequences.

That’s it for this week’s blog.