How To Introduce Dogs When It’s Cold Outside

How To Introduce Dogs When It’s Cold Outside

Trying to find ways to help your dog burn off energy or not to be bored out their mind during the winter months can be a chore, but doggie playdates can be a great way to change up your dog’s routine. However, there’s the possibility of them drumming up some drama if the introduction isn’t done the right way, which is why it’s so important to know how to introduce dogs in a variety of environments.

I love Chicago; I consider it to be my home. but one thing I could do without is the cold winter months, especially since I do a lot of work outside when working with clients and training their dogs. It really slows things down and puts a damper on lots of potential activities that you can engage in with your dog, including visits to the dog park.

Ideally, when introducing two dogs that do not know each other, I would want to introduce them outside of the home or in neutral territory and then bring them back in together. There’s more to it, but that’s the general gist of it.

But when the weather is in the low single digits and in the negatives with the windchill factor, it really doesn’t help motivate us to take our dogs out for a 15-minute stroll so they can warm up to each other and then take them inside. In addition, not all dogs are built to be out in these lower temperatures for extended periods of time.

So how should you go about bringing another dog into your home? Well, that depends on what kind of personality your dog has and whether or not you’ve worked with me.

“Claiming the Door” Will Prepare Dogs for Introductions

For those of you who have worked with me in the past, the answer lies in the “claiming the door” exercise. The key problem with tension between dogs in the home lies in the natural instinct of territoriality. When dogs hear the doorbell or a knock at the door, they automatically go into territorial or suspicion mode, causing them to be overly assertive and even aggressive when confronting who or what they deem as an intruder.

But, by utilizing the “claiming the door” exercise, we are communicating to our dogs, “Thanks for letting me know someone is here, but I am in control now.” This simple non-verbal communication allows them to relax and not feel as if the responsibility of protecting the home is on their shoulders, therefore putting them in a more passive and inviting state of mind.

Remember, your dog(s) cannot greet a guest or a dog coming in until they have crossed the invisible boundary that is established when backing them up beyond the threshold. If you see any tension or shift in energy in your dog, simply turn to face them, step in, and tap on your remote collar to get them to back off. Always be mindful of their body language and correct anything you feel may be unacceptable.

For those of you who have not trained with me, the above may sound foreign. But fret not, I have a video giving an explanation of “Claiming The Door.” I also have some footage of this exercise being put to use that I’ll put together in the near future.

One thing that will allow you to bypass the territorial issue when you bring a dog inside is to remember that a big part of the problem lies in the initial doorbell or door knock. That is what triggers most dogs’ territorial instincts, so if you just think of how to get around that, you may very well skip all the drama and get some pooch socialization going in your home in no time!

Remember to always err on the side of safety, so if you’re unsure of yourself or your dog, don’t be afraid to invest in a properly fitting muzzle. Mesh ones are relatively inexpensive, but can only be worn for short periods of time as dogs cannot properly pant with them on. Baskerville or JAFCO muzzles are my go-to choice for dogs that need to wear them extensively.

Another really important thing to remember is that we always want to have control, so if your dog wears a harness, ditch it. It will only create frustration if they start to pull and we want to avoid that. A well-fitting prong collar or slip lead placed high on the neck below the jawline will give you optimum control.

Utilize a Hallway or Staircase to Introduce Dogs

This allows us to introduce the dogs in a more natural way and not face to face which can cause a tense stand off. The person in front should keep their dog focused on moving forward and not allow them to get too concerned about the dog behind them.

Ideally, you would do this for a couple of minutes if space permits. After a few minutes, you want to reverse roles and have the dog being introduced to the home be behind the dog that does live there so that they are now smelling the other dog.

Again, the person in front should keep moving forward and should not allow their dog to be concerned with the dog behind them. This is why having a prong collar or slip lead placed high on the neck is important because it allows us to have immediate control over our dog’s movements. A gentle leader collar can also give you control over the head. When you control the head, you control the body. 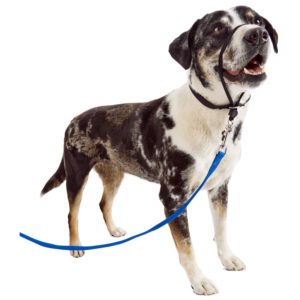 Check out this gentle leader head collar made by PetSafe.

After you’ve done this you can then bring in both dogs at the same time. You’ll have bypassed the dreaded doorbell ring or knock that would normally send your dog into a frenzy and have eased them into greeting without the tension. I always like to leave the leashes on for the first 15 minutes just in case I need to step in and give or correction.

Avoid Ringing the Doorbell if You Live in a House

For those of you that do not live in a unit building with a hallway or stairs and are in a single family home, there is still a way. Thankfully we have cell phones now and can call instead of ringing the doorbell. You will want to have your dog in a far-off room with a tv or radio on. You’ll also want them to be set up with whatever leash and collar you’ll be using. Have your guest call instead of ringing the doorbell and let them in. They should still keep their dog on a leash.

The tv or radio will have hopefully drowned out the sound of the door opening so that your dog’s territorial behavior isn’t triggered. Go get your dog and try to have the dogs take turns following one another with the space that you have. It’s very important that the dogs meet nose to butt and not nose to nose.

Once one dog has smelled the other, and have switched roles, pay attention to their body language, keeping an eye out for any tension. When you see tension, both owners should move opposite of each other to break the dogs apart, and if things haven’t escalated, you can try again with the introduction.

Don’t forget, if you feel you need a muzzle, get a muzzle!

Thank you for your continued support and let me know what topics you’d like covered in the comments section below!

Every Friday morning I’ll be sharing what I’ve learned in the last 10 years about our canine counterparts as well as answering any dog training/behavior questions you may have. Be sure to add info@canineperspectivechicago.com to your contact/safe list so you don’t miss out!