What to Do If an Off-leash Dog Approaches You

Home/Behavior, Chicago, Dog Rescue, Dogs/What to Do If an Off-leash Dog Approaches You

What to Do If an Off-leash Dog Approaches You

Most people have had encounters with off-leash dogs in areas where – according to Chicago’s leash laws – the dogs shouldn’t be. Most of the time, it’s not a big deal when the owner comes running up yelling their dog’s name repeatedly, apologizing as they pull their dog away or leash them up. But when an unknown dog charges toward you and your dog and you don’t know if the dog is aggressive or not, that’s a different story. That’s why you need to know what to do if an off-leash dog approaches you.

Assert Your Presence When An Off-Leash Dog Approaches

When I started my business down in Harlingen, TX, I was very deep in the Cesar Millan methodology and went out on pack walks with my dogs and my clients’ dogs every day like clockwork. Unfortunately, the mentality down there was to just let dogs out to go potty even if there wasn’t a fence. People would just put their dogs outside and close the door. This – of course – led to me being confronted by off-leash dogs on a regular basis.

I’ve been charged by a Bullmastiff, German Shepherd, a pack of 3 or 4 chihuahuas, puppies, Pitbulls, Labs, and so many other dogs I can’t recall right now. 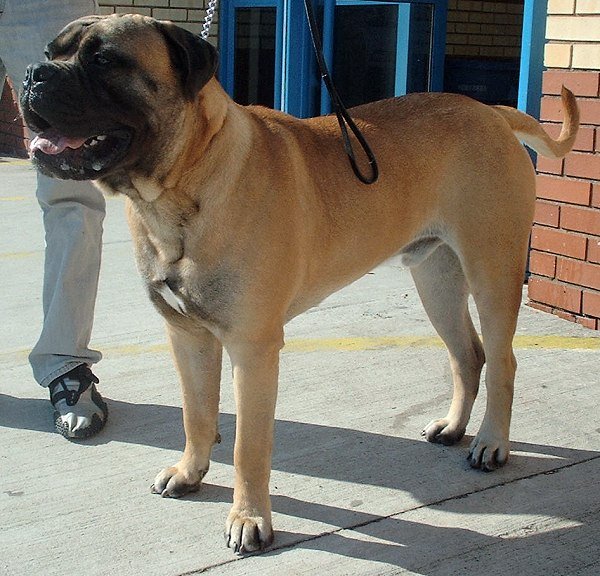 Bullmastiffs typically grow up to be between 100 and 130 pounds.

The Bullmastiff was actually the first dog that charged me while walking my dogs. It was a frightening moment to be honest because the dog was massive! I had my dogs with me, and out the corner of my eye I saw this large object growing bigger.

As I turn, I realize it’s a mastiff coming in at around 8 to 10 feet and my initial feeling was fear, as I had at least 4 dogs with me, but then, like instinct, I stepped in toward the charging Mastiff, snapped my fingers and hissed followed by a firm “Hey!” and the dog hit the breaks and ran back toward its home.

At first I was dumbfounded because I didn’t even think of what I was just doing. I just reacted and all those hours of watching and rewatching Cesar Millan came through. At that moment, I realized the power of presence and it reaffirmed in my head, “this stuff (Cesar Millan’s techniques) really works!”

So how does this apply to you?

First, there are three things you NEVER want to do unless there is an immediate out.

There Are Exceptions to These Three Rules

If there is a fence you know you can jump, a door you can get behind or you’re near your car, those may be better options. And if your dog is a chihuahua and the dog charging is a much larger dog, clearly your dog isn’t going to win.

These are all things I tell people to decide before it ever happens. It sounds terrifying, but if you’ve already gone through the scenario in your head of how you would address the situation when you are actually confronted with it, you’ll be able to react more assertively, which will empower you.

It’s like having a fire escape plan and rehearsing it with your family. It allows you to be proactive in the situation – should it arise.

How to Prepare Yourself for Encountering Off-leash Dogs

If you know that where you live is regularly inhabited with off-leash dogs, you can prepare yourself with a can of dog repeller, a blow horn, spray mace, or a large stick every time you go out. Just note that even if you blow the horn but you are also running away, the approaching dog will be spooked for a second then continue to charge because it notices that you’re afraid.

These tools are best employed while you are facing and stepping in toward the dog. By moving into the dog, you are putting confrontation and threat on the brain. And – paired with a loud sound or a stick that you hit the ground with to emit more of a threat – will cause them to move backward. Once you see the dog begin to flush back you can step backward away from the dog.

What to do Once You’ve Averted the Initial Threat

Again, I NEVER turn my back to a dog that was just in pursuit of me because they move quickly and can easily get to you before you realize it. I back away from the dog with the front of my body always facing them, pivoting to keep it facing towards them should they try to circle around me.

This forward body language will keep most dogs at bay, as most dogs don’t have the courage to bite or close the gap. It’s expected that the dog may move in again as you are backing up because you are taking pressure off the dog. If they move in, you simply step back in toward the dog and blow your horn or use whatever tool you have. Repeat this process until the dog veers away or stops pursuing. Once you get a safe distance away, you can turn your back and continue walking.

The reason why this works well is because when a dog or dogs are unattended by a human, they are not empowered to really protect anything. They may be acting out in a territorial manner or be over-excited and your presence activated it. So while they’re stuck in that moment, they’re not expecting the animal they’re pursuing to confront them and it catches them off guard.

I have tried this method countless times using just my body language and a hissing noise and only one time did it not work.

If a Dog Persists, You Have to Use Physical Contact

The reason it didn’t work was because the dog was with its owners and it felt empowered and it was over stimulated. I ended up having to give the dog a few firm kicks to the sternum to get him to stay at bay until the owners could run up and grab their dog. He wasn’t aggressive, but I had about 6 dogs with me and wasn’t about to let it become a free for all.

So when sound and presence doesn’t cut it, you have to act fast and employ physical touch. Another example of using touch to keep a dog at bay was in the Fall of 2017 when I was walking my dogs and client’s dogs down Cermak Road in the Little Village neighborhood.

A lady turned the corner with three of her dogs off-leash! I recognized the aggressor immediately as he was the most vocal one, so I switched all the dogs’ leashes from my left hand to my right hand to bring them away from the threat, as he was coming from the front left. As I controlled them, I met him with a foot to the chest in which he yelped and ran back taking with him the other two as they were merely following his lead.

What to Do If An Approaching Dog Bites You

Should the approaching dog bite and take hold, don’t scream, and don’t try to shake the dog off. Both of these things will turn the dog on and feed into its prey drive. This also will cause more damage to your muscles as they will tear.

What to Do If Your Dog is Attacked

If the dog is attacking your dog, let your dog’s leash go so that your dog has a fighting chance. If you can – and are willing – go for the attacking dog’s hind legs and lift them and begin kneeing or kicking them in its stomach region. You may even be able to reach the dog’s throat or jaw depending on their size.

If you can somehow get a leash, belt or another lengthy object – like a bar – under their throat, use it to apply constant pressure and choke them out. Don’t feel bad; it’s their life or your dog’s life.

This isn’t abuse. This is about protecting yourself and your dog(s) because if you don’t, they will, and things can get messy, FAST.

Your and Your Dog’s Safety Are Most Important

Your and your dog’s safety come first, so if an approaching dog comes close enough that you need to use your stick to hit them or give them a good kick to get them to back off, don’t be afraid to do so! When using physical touch, you have to mean it; don’t hold back or the approaching dog will take advantage of your fear. To put it in perspective, think about how being charged by a small dog feels to a big dog.

And before you are ever approached by an off-leash dog, know the answer to these questions:

These questions may seem a bit much to you, but to someone else, those questions hold answers that are all too real, as many people and their dogs have been attacked by other off-leash dogs. Plus, it’s better to think of those questions now while you’re not in a panicked state and can think clearly.